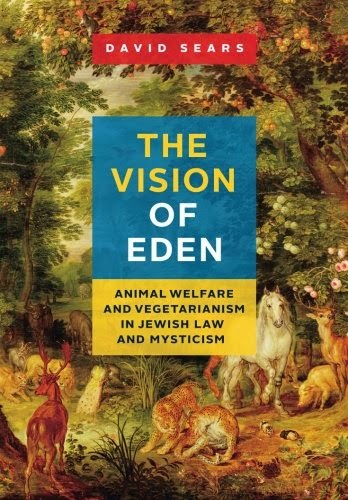 The Vision of Eden is a sourcebook of Judaic texts that draws upon a wide range of both Talmudic and Kabbalistic teachings, with a special focus on the issues of animal welfare and vegetarianism. While sympathetic to vegetarianism, the author is not a polemicist, but presents a balanced discussion of these issues, representing diverse points of view. Much of this material has never before been translated, including copious selections from the writings of the Chassidic masters and Rav Abraham Isaac Kook.

Samples may be read here:

Every reader of this unique and holy book will benefit extensively from it. Indeed, this book, The Vision of Eden, makes one feel that he has been handed a key to open the closed gates of the Garden of Eden that were shut to us ever since Adam was expelled, and the angels with swords in hand surrounded it, preventing us even from knocking on its gates, let alone entering it…

The Torah teaches compassion for every living creature. To study its detail is to study the essence of God. Rabbi Sears has done extensive and valuable research into a topic the world depends on for its existence…

What Jewish Vegetarians Are Saying About "The Vision of Eden"

"Currently most Jews eat meat and other animal products, and relatively few Jews seem concerned about the cruel mistreatment of animals on factory farms and in other areas. However, David Sears’ landmark book, with its many examples of Jewish teachings about compassion for animals, has the potential to change all of this…His book goes beyond those of other Jewish scholars who have written about Jewish teachings on animals because he combines his extensive knowledge of Judaism with an awareness of how far realities related to how society treats animals differ from the demands of Jewish teachings, and he is committed to making others aware of the need to end these discrepancies."

"David Sears has written a remarkable book that, while brilliantly researched within the context of the Jewish religion, is universal in the themes presented. The Vision of Eden is a book that everyone seeking a deeper connection to their spiritual identity needs to read."

"This is a wonderful book, a necessary book, a just book which will contribute much to clarifying where Judaism stands on the issue of meat, vegetarianism, and animal welfare. …Sears seems to know - and to have gathered together to our great advantage - all the texts that pertain to tsa'ar ba'alei chaim (the Jewish tradition that states that it is forbidden to cause pain to an animal except under specific conditions of human need, and that that pain should be as minimal as possible.)"

"Sears is lucid, accessible (even to the uninitiated) and thorough. He seems to have integrated every conceivable Jewish source pertaining to animal welfare… To his credit, Sears does not omit or misconstrue sources that are contrary to current religious or political agendas. Nor does he gloss over the "marked ambivalence" of the Jewish tradition toward vegetarianism… [However, he] respectfully encourages the Gedolei Yisrael to resolve the halachic challenges posed by factory-farm conditions — not only tza'ar baalei chayim but also "kashrut problems" that result from "an increase in sickness among animals" and the "inevitably higher margin of error in mass production" of meat, as well as the health and ecological harm caused by animal-based diets."

Some activists greatly overstate the case for vegetarianism, cherry-picking sources and ignoring history. In contrast, Rabbi David Sears presents an honest survey of the issues and different views. He masterfully describes the halachic, philosophical and kabbalistic arguments, incorporating translations of key texts and extensive endnotes. While himself a vegetarian, Rabbi Sears clearly demonstrates that eating meat is religiously acceptable. According to some, vegetarianism is an Edenic goal toward which one should strive. According to others, eating meat shows the difference between humans and animals, perhaps even elevating the animals to a higher level of existence. But all agree that we should minimize cruelty to animals and eat healthily. ... Even a limited vegetarianism -- perhaps only during weekdays -- can help us think differently about food and its purpose in our daily lives.


In The Vision of Eden [Dovid Sears] presents what is surely every possible authentic Torah source which shows us how carefully and with what great sensitivity an animal must be treated, including sources which powerfully convey the importance of not being unfeeling or brutish towards animals.
Whether or not you agree with the author’s conclusions regarding the consumption of meat, you’ll most likely agree that this is the only book on the subject of Jewish vegetarianism with broad appeal—not only because of the author’s Torah scholarship, but because he doesn’t proselytize. Yes, Dovid Sears believes deeply that there are spiritual and physical benefits of not consuming meat, but he draws his conclusions from Holy sources, without cherry-picking and without condemnation of those who do choose to eat meat. Rabbi Sears respects his readers as he educates.
Healthy Jewish Cooking, March 2015

David Sears (sometimes spelled Dovid Sears) is the author of more than a dozen books on Jewish thought, including The Breslov Pirkey Avot and The Path of the Baal Shem Tov. A skilled artist, he also has written and illustrated a number of children’s books, including The Lost Princess, A Chassid’s Journey, and Tales From Reb Nachman. In the field of Jewish music, he has co-produced and written liner notes for several recordings by clarinetist-mandolinist Andy Statman, including Between Heaven and Earth: Music of the Jewish Mystics and Songs of Our Fathers (with David Grisman). Since 1997, Rabbi Sears has directed the Breslov Center of New York, an outreach organization under the guidance of Rabbi Elazar Mordechai Kenig, leader of the Breslov community in Tzefat, Israel.

Also by the Same Author:

Chayei Nefesh: An Exploration of the Role of the Tzaddik by Rabbi Gedaliah Aharon Kenig. Translated by Dovid Sears and Dovid Zeitlin, late 1980s. Online version (Part I) here:
http://breslovcenter.blogspot.com/2011/12/chayei-nefesh-exploration-of-role-of.html

Compassion for Humanity in the Jewish Tradition (Jason Aronson / Rowman & Littlefield 1998)
A comprehensive anthology of mostly original translations with several essays by the author. A revised edition with additional source material is in progress.
Also see: http://compassionforhumanity.blogspot.com/

The Tree That Stands Beyond Space: Rebbe Nachman and the Mystical Experience (Breslov Research Institute 2002)
Rabbi Nachman's teachings as related to mystical awakening and inner growth, many never translated previously. With essay "On the Practice of Breslov Chassidus."
Also available in Spanish through Breslov Research Institute. Translation by Guillermo Beilinson.

Shir Na'im: A Song of Delight by Rabbi Nachman of Breslov (Orot 2006)
Translation and original commentary on Rabbi Nachman's only surviving poem, printed at the beginning of Likutey Moharan. With scholarly annotation and appendices, including an essay by director of Orot, Rabbi Bezalel Naor, who edited this volume.

The Breslov Pirkey Avot (Breslov Research Institute 2010)
A fully-annotated anthology of original translations from the entire range of Breslov literature—the fruit of seven years work, on and off—on this classic tractate of the Mishnah related to "living the life" of Torah.
Part II ("A Deeper Look") addresses various mystical subjects for the more advanced reader.
Beautifully designed as a large-format hardcover book by Ben Gasner of Jerusalem.
Also available in Spanish through Breslov Research Institute. Translation by Guillermo Beilinson.

The Power of Psalms (Breslov Research Institute 2013)
Book One of this Breslov anthology on Tehillim (Psalms) is currently available. The project is projected as a five volume series to be published one book at a time (there are five books, or sections, of Psalms). Translations of "Breslov Insights" by David Sears; translation of Psalms by Moshe Mykoff, with facing Hebrew text.
Book Two is now being edited for publication in 2015.
Cover design by Ben Gasner.

In addition, another work compiled and annotated by Dovid Sears and Dovid Zeitlin is in progress: Breslov Eikh she-Hu: Breslov The Way It Is: Customs and Practices, Past and Present. Some of this material appears online here (see sidebar, top right column): http://breslovcenter.blogspot.com/